The Imply release notes provide information on features, improvements, and bug fixes in each release. Be sure to read these release notes carefully before upgrading to the 4.0.5 release.

Apache Druid 0.20.0-iap contains new features, performance enhancements, bug fixes, and major documentation improvements from our contributors. Check out the complete list of changes and everything tagged to the milestone.

On Druid engine, we have made numerous improvements and we are looking forward to seeing the expanded possibilities the new features bring.

Druid is constantly at the forefront of analytical database performance. In Imply 4.0 release, we have made a number of improvements on the core engine side to keep us on the edge.

In Imply 3.4 vectorized query execution had been enabled by default. In Imply 4.0, the query engine has been vectorized to support calculations on group by queries as shown in the example below.

A common type of query that cannot be vectorized in previous releases are queries involving expression calculations. In the following example, the total_price column is computed on the fly, and this is an example of a virtual column.

This is a very common usage pattern. In this release, we have made changes to enable vectorized query execution for such queries. As you can see from the benchmarks below, we are reducing the execution time anywhere between 6x to 11x. 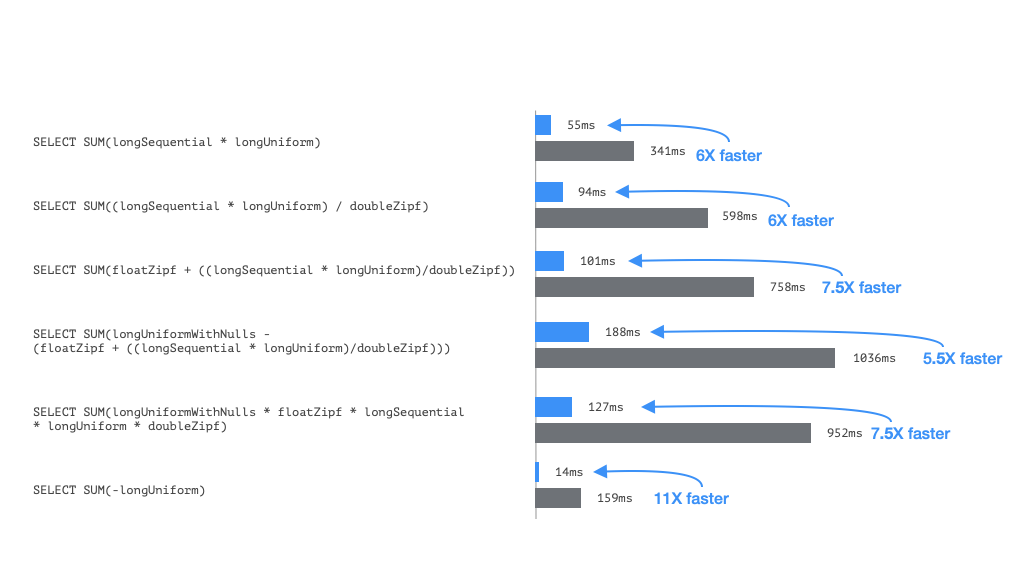 It’s often difficult to determine the best data layout at ingestion time, since optimal layout may depend on queries run in the future. At the same time, it is difficult to maintain an optimal data layout as new data constantly arrives in the cluster.

Two major data layout factors that contribute to query performance are segment size and partitioning scheme. We have seen up to 40 times speedup with production workloads with optimal data layouts when comparing to non-optimized layouts.

The ultimate solution is an auto-optimization system that constantly monitors the actual workload and optimizes the data layout. In Imply 4.0 release, we are making a big step towards this goal.

In this release, you can set up auto-compaction rules that reshape your segments into optimal sizes with optimized partitioning schemes as you learn about your workload over time. Those auto compaction rules will continuously run in the background, so that newly arrived data will be optimized over time.

In the following example, queries that filter on specific partitioning columns can quickly eliminate segments without actually reading them. 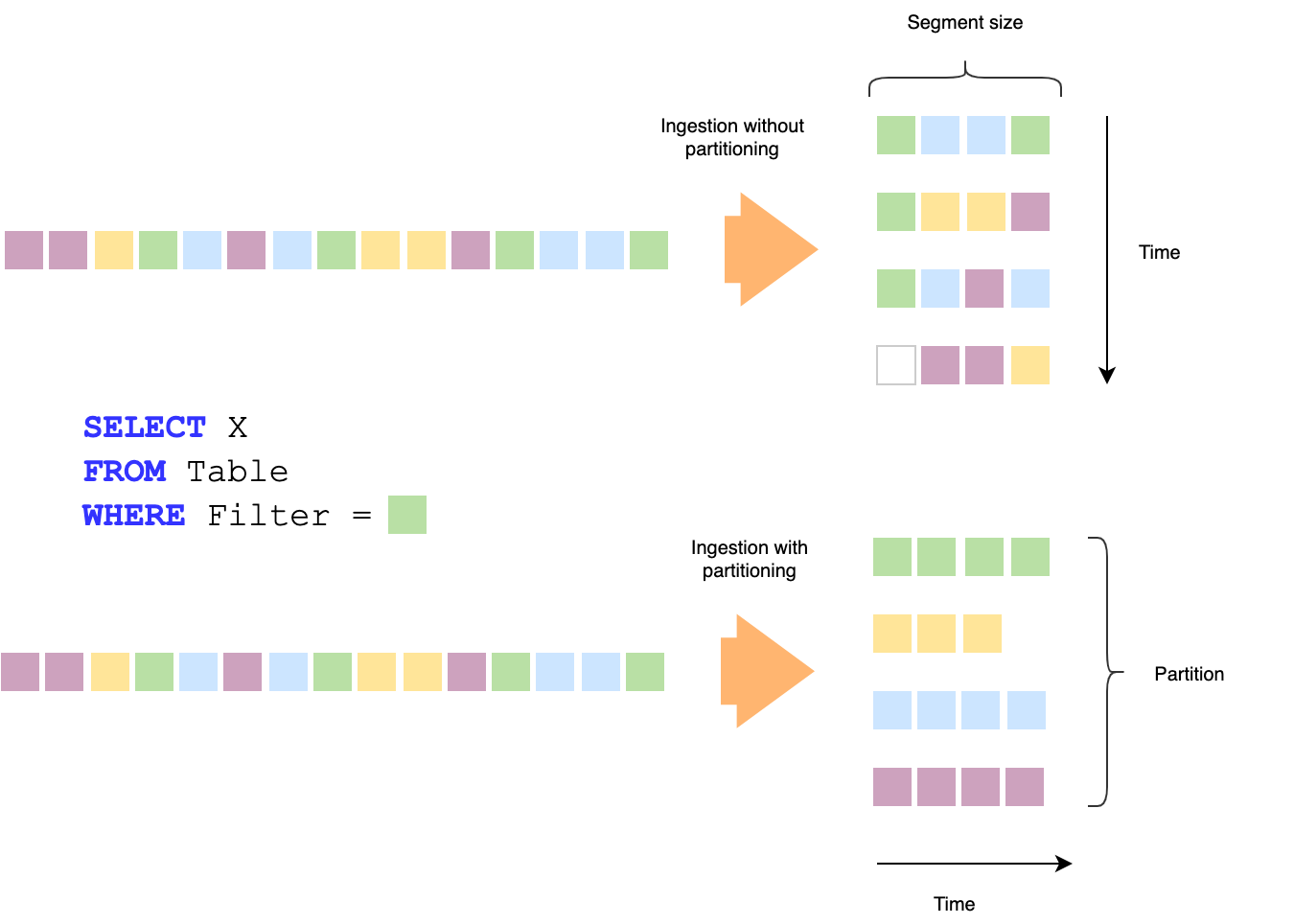 Types of use cases where this might apply are:

The Druid web console now includes statistical distribution of segment size. If you see a significant difference between small-average-max size of the segment, then it’s a good indicator that a compaction pass can help you improve query performance.

We have also made numerous improvements on the Druid web console query view as well.

Many dependencies have been updated to newer versions to address security vulnerabilities.

For a full list of open issues, please see https://github.com/apache/druid/labels/Bug

The fastest, greenest Pivot ever

In Imply 4.0, we’ve made a number of improvements to ensure that Pivot remains the fastest, easiest tool for exploratory self-service analytics, even when operating against data sources with very high cardinality columns.

Query times for filter preview results are now much faster than in previous releases, and ad-hoc filter values can now be applied without waiting for preview values to be returned. This allows users to more rapidly apply filter changes, especially when filtering on well-known dimension values.

Additionally, Imply 4.0 adds Alpha support for query cancellation when using Pivot. With this feature enabled, triggered queries that are no longer needed by the UI will be cancelled across the entire stack, freeing up resources on both the Pivot application layer as well as on the Druid cluster.

Some examples of where query cancellation might impact performance and cost on a cluster include navigating away from a dashboard or data cube when a long-running query is still being processed, switching pages on a dashboard, or making rapid changes to filters and shown dimensions on a data cube.

As part of an ongoing initiative to offer SQL as an alternative to the Plywood expression language throughout the Pivot UI, we’re very excited to announce an early look at a major new capability in Pivot for Imply 4.0 - the ability to create data cubes using a SQL statement wrapper. 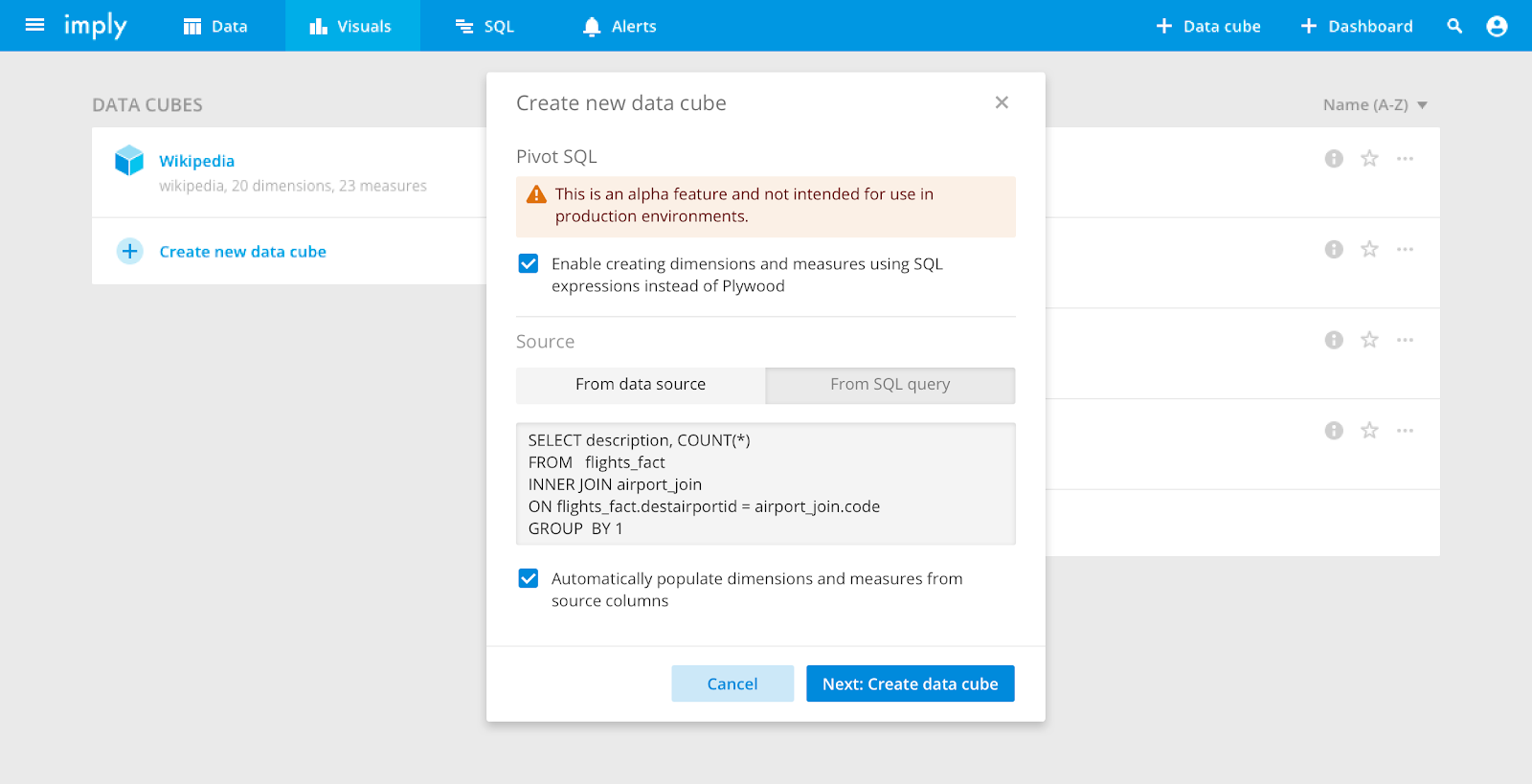 Note that Pivot SQL is still an alpha-stage feature. The team is focused on validating that security, performance, and data correctness are not impacted when using these new capabilities. Until then, we don’t recommend using Pivot SQL in production environments.

We’ve made a number of improvements to the dashboarding management user experience in 4.0, most notably around updating dashboard tiles to reference new data cubes. In Imply 4.0, we’ll ensure that when updating the data cube for a dashboard tile, all possible tile settings remain in place, including shown columns and filters that exist on the new data cube.

In Imply 4.0, we are removing support for connecting to data sources other than Imply Druid. We’re doing this to ensure that we can continue to provide the most robust, performant user experience when using Imply Druid. If you’re currently connecting Pivot to Apache Druid or another database, please contact our support team for help migrating to Imply Druid

All changes and bug fixes

Imply is excited to announce the first release of private Imply Cloud on GCP, which is built on Google Kubernetes Engine.

It provides a similar experience of Imply Cloud on AWS in a more secure, self-contained environment completely under customer control.

This implementation provides a tighter integration with GKE and kubernetes environments and users are able to choose GCP instances out of a pre-selected machine pool.

Other changes and bug fixes

Imply now provides a generic installer deployment model that works on non-Kubernetes environments (e.g., on-prem or VMs on cloud) for a self-hosted use case.

Automation of the deployment workflow is supported through the use of user parameters via configuration files.

4.0 introduces a new framework, style, and organization for the Imply documentation. We've improved the organizational structure to correspond to the primary product components: Pivot, Druid, Clarity and the Manager, which appear at top right. The Imply doc category contains documentation that is common across products.

The Druid documentation is now bundled in a more integrated manner with the rest of the Imply docs, with a shared look and navigational structure.

Also note that while the URL paths for versions of the documentation earlier than 4.0 haven't changed, some doc paths for the latest doc version may have changed.

If you are upgrading from a previous Imply release, please take note of the following sections.

Be aware of the following changes between 0.19.0-iap and 0.20.0-iap before upgrading. If you're updating from an earlier version than 0.19.1-iap, please see the release notes of the relevant intermediate versions.

When upgrading from Imply 3.3, which is based on Apache Druid 0.18.0, also note any items in the "Updating from previous releases" section of the Imply 3.3 release notes that may be relevant for your deployment.

As of July 15, 2020, Imply version 2.x is no longer supported. If you still have active deployments that use Imply version 2.x, you are strongly encouraged to upgrade to the current version as soon as possible. See Subscription Support Maintenance Terms for more information about supported versions.