Druid has a multi-process, distributed architecture that is designed to be cloud-friendly and easy to operate. Each Druid process type can be configured and scaled independently, giving you maximum flexibility over your cluster. This design also provides enhanced fault tolerance: an outage of one component will not immediately affect other components.

Druid processes can be deployed any way you like, but for ease of deployment we suggest organizing them into three server types: Master, Query, and Data.

In addition to its built-in process types, Druid also has three external dependencies. These are intended to be able to leverage existing infrastructure, where present.

Druid uses deep storage only as a backup of your data and as a way to transfer data in the background between Druid processes. Druid stores data in files called segments. Historical processes cache data segments on local disk and serve queries from that cache as well as from an in-memory cache. This means that Druid never needs to access deep storage during a query, helping it offer the best query latencies possible. It also means that you must have enough disk space both in deep storage and across your Historical servers for the data you plan to load.

Deep storage is an important part of Druid's elastic, fault-tolerant design. Druid bootstraps from deep storage even if every single data server is lost and re-provisioned.

The following diagram shows how queries and data flow through this architecture, using the suggested Master/Query/Data server organization: 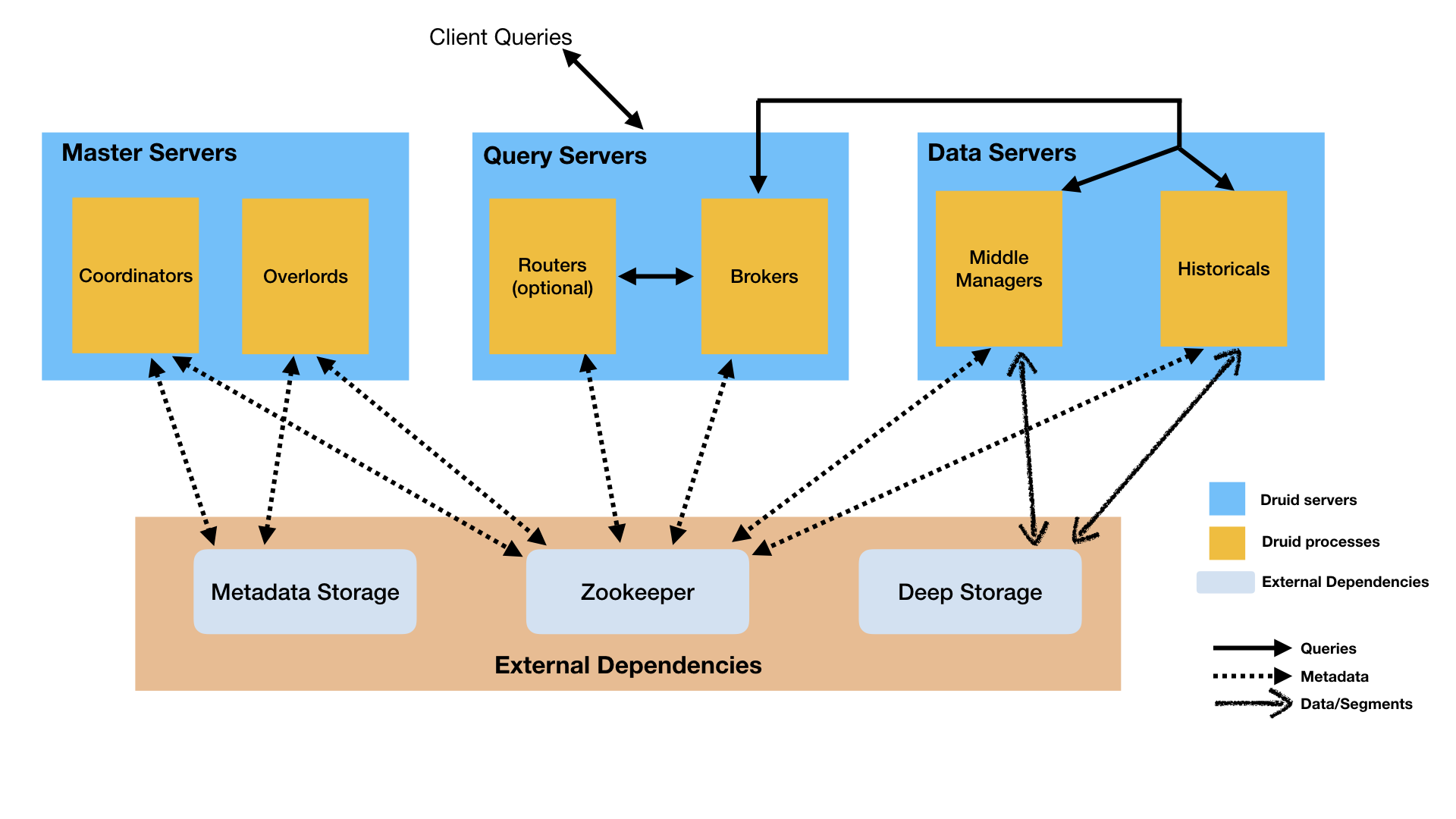 A datasource may have anywhere from just a few segments, up to hundreds of thousands and even millions of segments. Each segment is created by a MiddleManager as mutable and uncommitted. Data is queryable as soon as it is added to an uncommitted segment. The segment building process accelerates later queries by producing a data file that is compact and indexed:

Periodically, segments are committed and published to deep storage, become immutable, and move from MiddleManagers to the Historical processes. An entry about the segment is also written to the metadata store. This entry is a self-describing bit of metadata about the segment, including things like the schema of the segment, its size, and its location on deep storage. These entries tell the Coordinator what data is available on the cluster.

For details on modeling your data in Druid, see schema design.

On the Coordinator / Historical side:

Segments all have a four-part identifier with the following components:

You may be wondering what the "version number" described in the previous section is for. Or, you might not be, in which case good for you and you can skip this section!

The version number provides a form of multi-version concurrency control (MVCC) to support batch-mode overwriting. If all you ever do is append data, then there will be just a single version for each time chunk. But when you overwrite data, Druid will seamlessly switch from querying the old version to instead query the new, updated versions. Specifically, a new set of segments is created with the same datasource, same time interval, but a higher version number. This is a signal to the rest of the Druid system that the older version should be removed from the cluster, and the new version should replace it.

The switch appears to happen instantaneously to a user, because Druid handles this by first loading the new data (but not allowing it to be queried), and then, as soon as the new data is all loaded, switching all new queries to use those new segments. Then it drops the old segments a few minutes later.

Each segment has a lifecycle that involves the following three major areas:

You can inspect the state of currently active segments using the Druid SQL sys.segments table. It includes the following flags:

Druid has an architectural separation between ingestion and querying, as described above in Indexing and handoff. This means that when understanding Druid's availability and consistency properties, we must look at each function separately.

On the ingestion side, Druid's primary ingestion methods are all pull-based and offer transactional guarantees. This means that you are guaranteed that ingestion using these methods will publish in an all-or-nothing manner:

Additionally, some ingestion methods offer an idempotency guarantee. This means that repeated executions of the same ingestion will not cause duplicate data to be ingested:

On the query side, the Druid Broker is responsible for ensuring that a consistent set of segments is involved in a given query. It selects the appropriate set of segment versions to use when the query starts based on what is currently available. This is supported by atomic replacement, a feature that ensures that from a user's perspective, queries flip instantaneously from an older version of data to a newer set of data, with no consistency or performance impact. (See segment versioning above.) This is used for Hadoop-based batch ingestion, native batch ingestion when appendToExisting is false, and compaction.

Typically, atomic replacement in Druid is based on a core set concept that works in conjunction with segment versions. When a time chunk is overwritten, a new core set of segments is created with a higher version number. The core set must all be available before the Broker will use them instead of the older set. There can also only be one core set per version per time chunk. Druid will also only use a single version at a time per time chunk. Together, these properties provide Druid's atomic replacement guarantees.

Druid also supports an experimental segment locking mode that is activated by setting forceTimeChunkLock to false in the context of an ingestion task. In this case, Druid creates an atomic update group using the existing version for the time chunk, instead of creating a new core set with a new version number. There can be multiple atomic update groups with the same version number per time chunk. Each one replaces a specific set of earlier segments in the same time chunk and with the same version number. Druid will query the latest one that is fully available. This is a more powerful version of the core set concept, because it enables atomically replacing a subset of data for a time chunk, as well as doing atomic replacement and appending simultaneously.

If segments become unavailable due to multiple Historicals going offline simultaneously (beyond your replication factor), then Druid queries will include only the segments that are still available. In the background, Druid will reload these unavailable segments on other Historicals as quickly as possible, at which point they will be included in queries again.

Queries are distributed across the Druid cluster, and managed by a Broker. Queries first enter the Broker, which identifies the segments with data that may pertain to that query. The list of segments is always pruned by time, and may also be pruned by other attributes depending on how your datasource is partitioned. The Broker will then identify which Historicals and MiddleManagers are serving those segments and distributes a rewritten subquery to each of those processes. The Historical/MiddleManager processes execute each subquery and return results to the Broker. The Broker merges the partial results to get the final answer, which it returns to the original caller.

Time and attribute pruning is an important way that Druid limits the amount of data that must be scanned for each query, but it is not the only way. For filters at a more granular level than what the Broker can use for pruning, indexing structures inside each segment allow Historicals to figure out which (if any) rows match the filter set before looking at any row of data. Once a Historical knows which rows match a particular query, it only accesses the specific rows and columns it needs for that query.

For more details about how Druid executes queries, refer to the Query execution documentation.