Measures are numeric data values derived from the original data source. For example, a measure can be an aggregation or a function output.

A measure that represents the event count is often created by default, depending on the data. For example, the "Number of Events" measure: 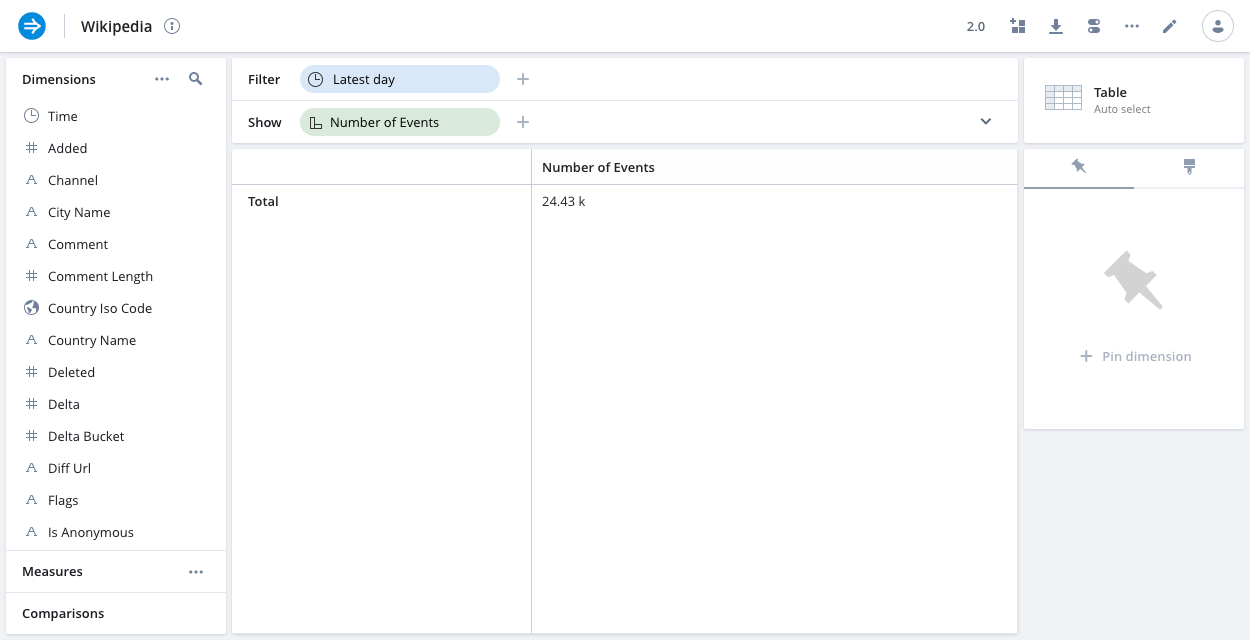 You can edit them in the Measures tab of the data cube edit view: 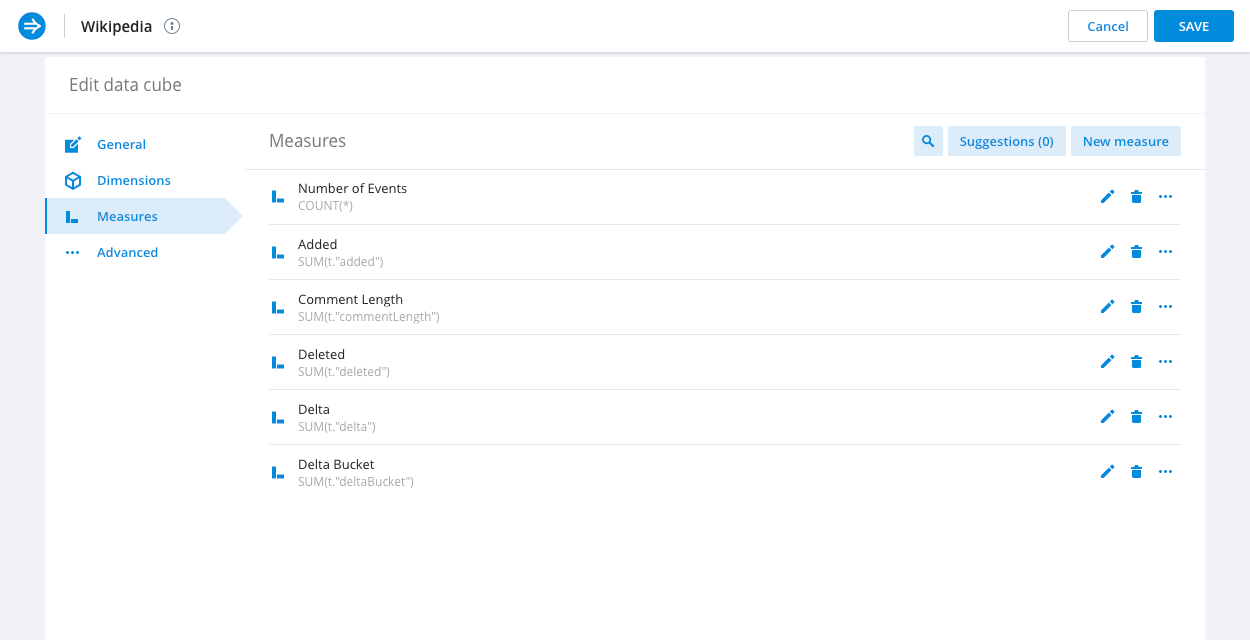 You can group related measures into measure groups. This can be particularly useful for measures which come from the same basic attribute or are otherwise similar.

For example in a sales dataset scenario you might be interested in Total revenue, Min revenue, Max revenue, Avg revenue, Median revenue per user, and more. It might therefore make sense to group those measures.

To create a group simply click the ... icon in one of the measures and select Add to a new group. Then drag the relevant measures into the newly created group.

You can configure how a measure is formatted in the Format tab. 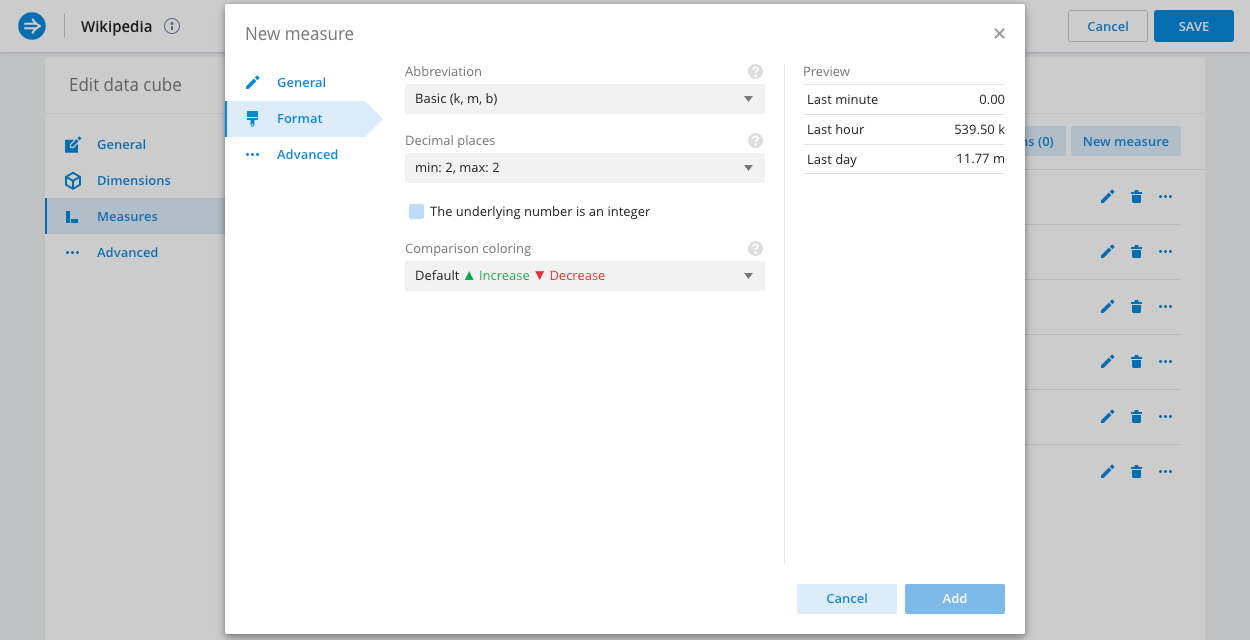 Here you can select from a list of abbreviation sets that can be applied to format the measure, and adjust the decimal precision that will be displayed.

Additionally, when applying time comparisons to measure values, you can configure the display coloring for increased and decreased values.

You can specify how to fill a measure on continuous visualizations (such as the line chart).

Data sets can have gaps in data, for example, due to down time for the systems that generate the data. There are a few ways to handle the missing data in charts, as determined by fill options. The following image shows four measures that are differentiated only by differing fill option. 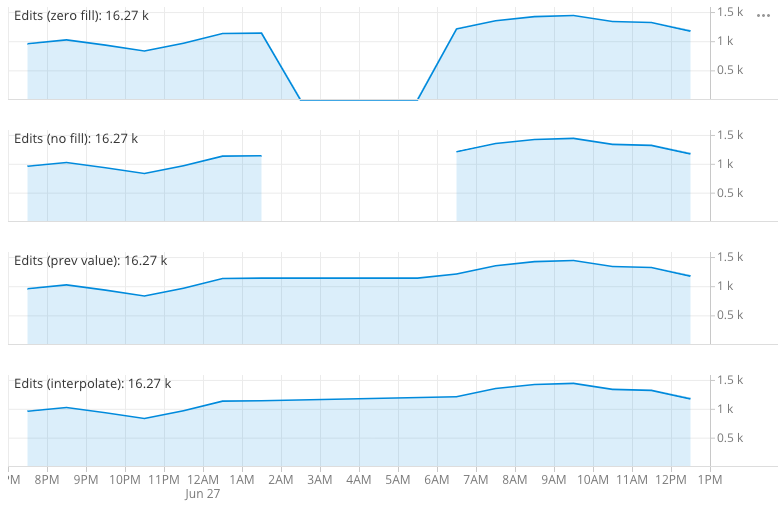 The possible options are:

In the Advanced tab, you can transform a measure to be displayed as Percent of parent segment or as Percent of total instead of the default measure display. 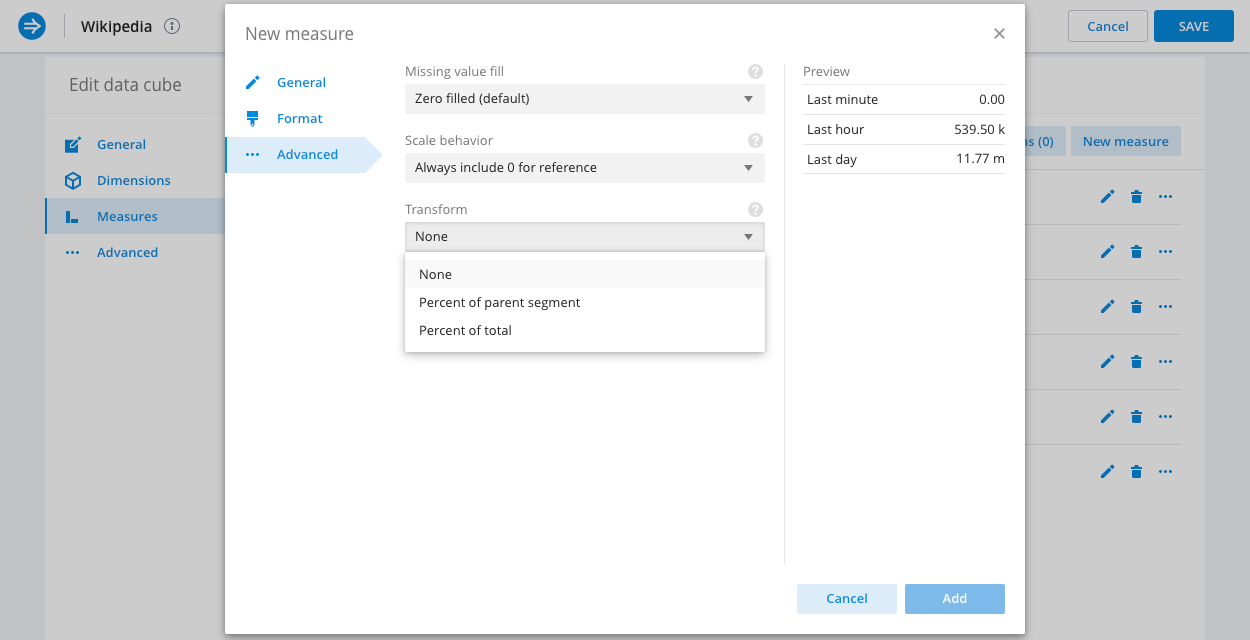 You can create measures by clicking the New measure button in the Measures tab.

Use the Basic tab to configure simple measures consisting of a single aggregate function over a single column (with an optional filter).

A measure can also represent some post aggregation or computation (see the specific measure types section below). In that case you would use the Custom measure tab, where you can enter any supported Plywood or Pivot SQL expression as the measure's formula. See Custom dimensions and measures for more information. 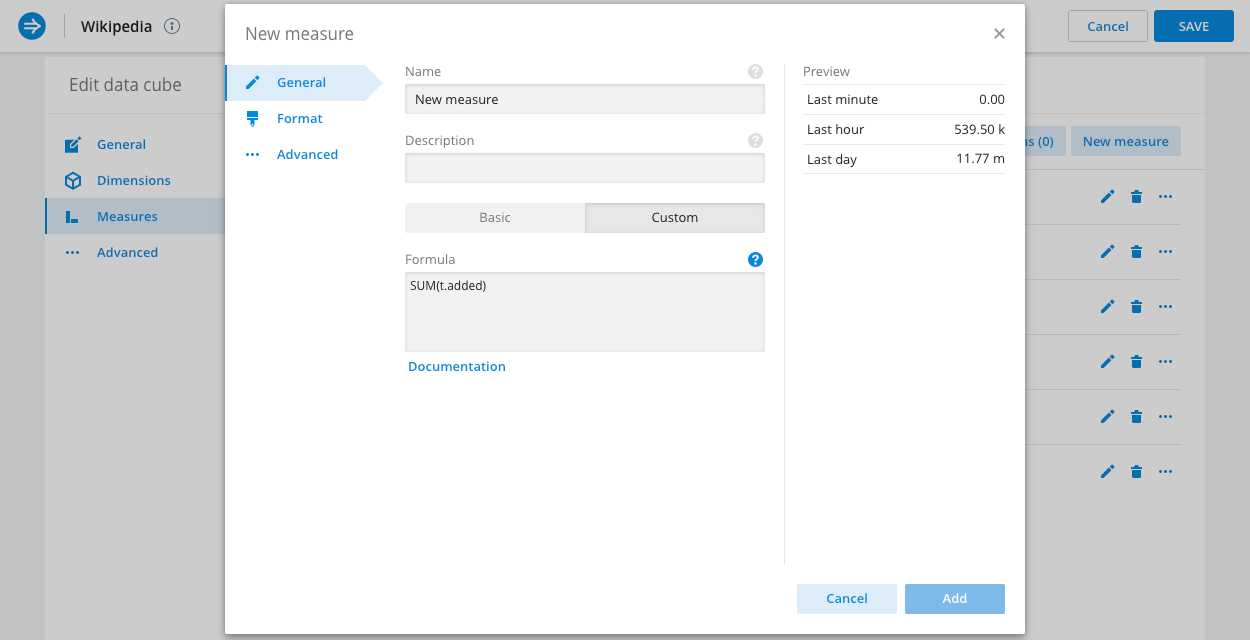 Imply can provide suggestions about simple measures. This is done by scanning the schema of the underlying data source and automatically suggesting a measure, with the appropriate aggregate, for any column that is not already represented by one of the existing measures.

Measure suggestions are particularly useful if you have added a new column to your data source after creating the data cube and now want to represent it in your views.

In this section we will look at some of the many specific measure types supported.

Filtered aggregations are very powerful. If, for example, your revenue in the US is a very important measure, you could express it as:

It is also common to express a ratio of something filtered vs unfiltered.

Ratios are often useful to see the relationships in your data.

Here's one that expresses the computation of CPM:

A quantile can be a very useful measure of your data. For large datasets it is often more informative to look at the 98th or 99th quantile of the data rather than the max, as it filters out freak values. Similarly a median (or 50% quantile) can present different information than an average measure.

To add a quantile measure to your data simply define a formula like so:

It is possible to fine-tune the accuracy of the approximate quantiles as well as pick different algorithm to use.

It is possible to fine-tune approximateHistogram based quantiles, allowing you to determine your trade-off between performance and accuracy.

Enter a 3rd parameter in the quantile formula of the form 'resolution=400,numBuckets=10,lowerLimit=0,upperLimit=1000' to pass those tuning parameters to the underlying aggregator.

To understand how to tune the approximateHistogram parameters, see the Druid documentation

Sometimes the rate of change (over time) of a measure is very important.

There is a special function provided by Pivot PIVOT_TIME_IN_INTERVAL('SECOND') that gives the corresponding number of time units (first parameter) in the time interval over which the aggregation (whatever it is) is running.

Therefore it is possible to define a measure like

to give you the accurate rate of bytes per second regardless of your filter window or selected split (hour, minute, or whatever).

There is a magic constant available for expressions $MillisecondsInInterval that corresponds to the number of milliseconds in the time interval over which the aggregation (whatever it is) is running.

Therefore it is possible to define a measure like

to give you the accurate rate of bytes per second regardless of your filter window or selected split (hour, minute, or whatever).

It is possible to define measures that perform a sub-split and a sub aggregation as part of their overall aggregation. This is needed to express certain calculations which otherwise would not be possible.

The general form of a double aggregated measure's formula is:

When dealing with netflow data at an ISP level one metric of interest is 5 minutely 95th percentile, which is used for burstable billing.

To add that as a measure (assuming there is a column called bytes which represents the bytes transferred during the interval), set the formula as follows:

When looking at users engaging with a website, service, or app, we often need to know the number of daily active users.

This can be calculated as:

Here the data is sub-split by day (P1D), and then an average is computed on top of that.

If you switch how you ingest your underlying metric and can't (or don't want to) recalculate all of the previous data, you could use a derived measure to seamlessly merge these two metrics in the UI.

Let's say you had a column called revenue_in_dollars, and for some reason you will now be ingesting it as revenue_in_cents.

Furthermore, right now your users are using the following measure:

If your data had a 'clean break' where all events have either revenue_in_dollars or revenue_in_cents with no overlap, you could use:

If instead there was a period where you were ingesting both metrics, then the above solution would double count that interval. You can 'splice' these two metrics together at a specific time point.

Logically, you should be able to leverage Filtered aggregations to do:

Here are more example expressions that you can use to build custom measures:

Counts all the rows in the data cube.

Counts the distinct values of the dimension.

Returns the sum of all values for the dimension.

Returns the smallest value of the dimension.

Returns the largest value of the dimension.

Returns the average value of the dimension.

Returns the x quantile of the dimension. You cannot use a compound expression in this function.

Limits the number of records to apply a given aggregate. This example returns x or fewer results.