Disaster Recovery (DR) refers to an organization's ability to regain access to its infrastructure and maintain continuity in the event of a natural or human-induced disaster. It contains processes, tools, and polices designed to maintain production during an outage and to restore systems operations to their original state after the incident.

The control plane runs in AWS and has the following components:

The data plane has the following components:

When designing your DR strategy, consider the processes running in both the control plane and the data plane. Note that the different parts of each plane may have multiple components or services associated with them.

The control plane of Imply Hybrid is deployed across multiple Availability Zones within a region. It is highly available by design.

Your data plane is considered highly available if you have at least three master nodes, more than one query node, more than one data node, and your data sources are replicated. For more information about the requirements for nodes, see Imply Cloud instance types.

You can use either an active-active or an active-passive DR strategy with Imply Hybrid:

For an effective DR strategy, you need to have procedures in place before an incident occurs. The planning can be broken down into the following categories:

When planning a DR strategy, there are three main metrics to consider:

Evaluating RPO, RTO, and cost metrics can help you determine which DR strategy is best suited for your business needs, budget, and recovery goals.

Determine which teams need to be available to execute the DR plan. Since Imply Hybrid runs in your AWS VPC, users tasked with implementing your DR strategy must have permissions for both Imply Hybrid and your AWS infrastructure.

In addition, develop a plan to communicate with affected users.

Identify the tools you need for setting up and deploying clusters as well as for modifying network connectivity. Ideally, you should be able to replicate all of your configurations in a different region. In addition, you'll need to replicate metadata manually, so familiarize yourself with database backup tools like mysqldump.

Implementing either an active-active or active-passive DR strategy requires access to both Imply Hybrid and AWS. Verify that you can make changes to both environments, including spinning up new resources.

The following image shows the architecture of an active-active setup: 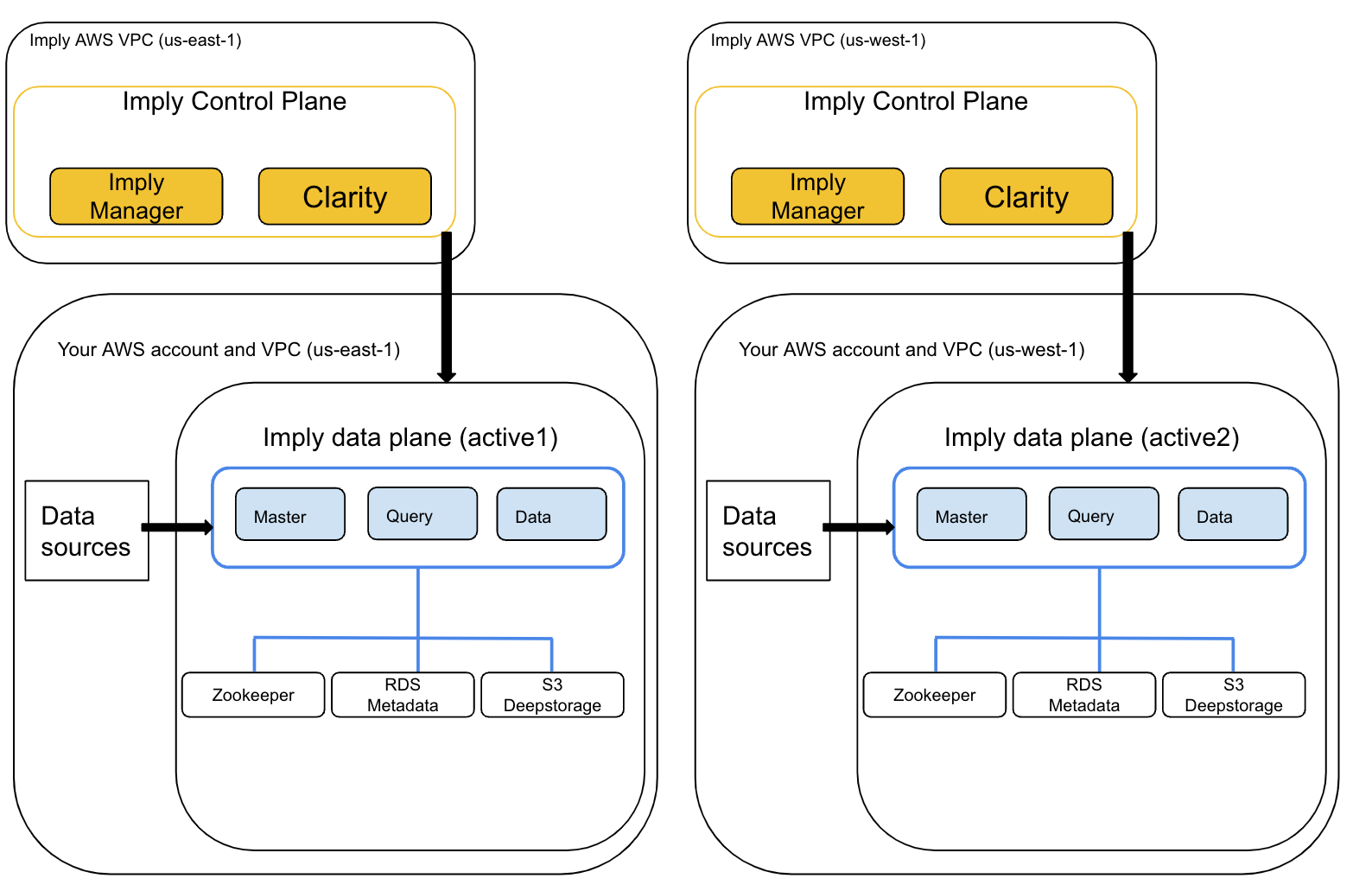 To implement an active-active strategy, perform the following steps:

This approach relies on AWS's multi-region sync capability to keep the replica in the secondary region updated, which requires replicating metadata and deep storage components.

The following image shows the architecture of an active-passive setup:

To implement an active-passive strategy, perform the following steps:

Recover from an incident

The following sections describe failover and failback procedures for an active-passive solution.

In a DR situation, it's important to restore business operations and workflows from the standby system to the primary one as quickly and efficiently as possible while accounting for disaster-related issues and potential security risks.

With an active-passive setup, safeguarding information in a disaster situation is a two-stage process:

The following image shows the architecture of a failover setup in Imply Hybrid:

Failback is the process of restoring a system, component, or service previously in a state of failure back to its original, working state, and switching the standby system from functioning back to standby.

Consider incorporating the following steps into your Imply failback strategy: