Druid implements an extension system that allows for adding functionality at runtime. Extensions are commonly used to add support for deep storage (like HDFS and S3), metadata stores (like MySQL and PostgreSQL), new aggregators, new input formats, and so on.

Imply bundles many commonly used Druid extensions out of the box, including most core extensions. For available extensions, see the list below. Production clusters will generally use at least two extensions; one for deep storage and one for a metadata store. Many clusters will also use additional extensions.

Not all Druid core extensions are intended for use or packaged with Imply. For instance, the Apache Druid pac4j extension is not supported.

You can add Druid extensions in the Imply Manager. Several extensions are enabled by default, such as the druid-datasketches, druid-kafka-indexing-service, and druid-basic-security.

To view and enable bundled extensions, click the edit icon next to Druid extensions in the cluster setup page. 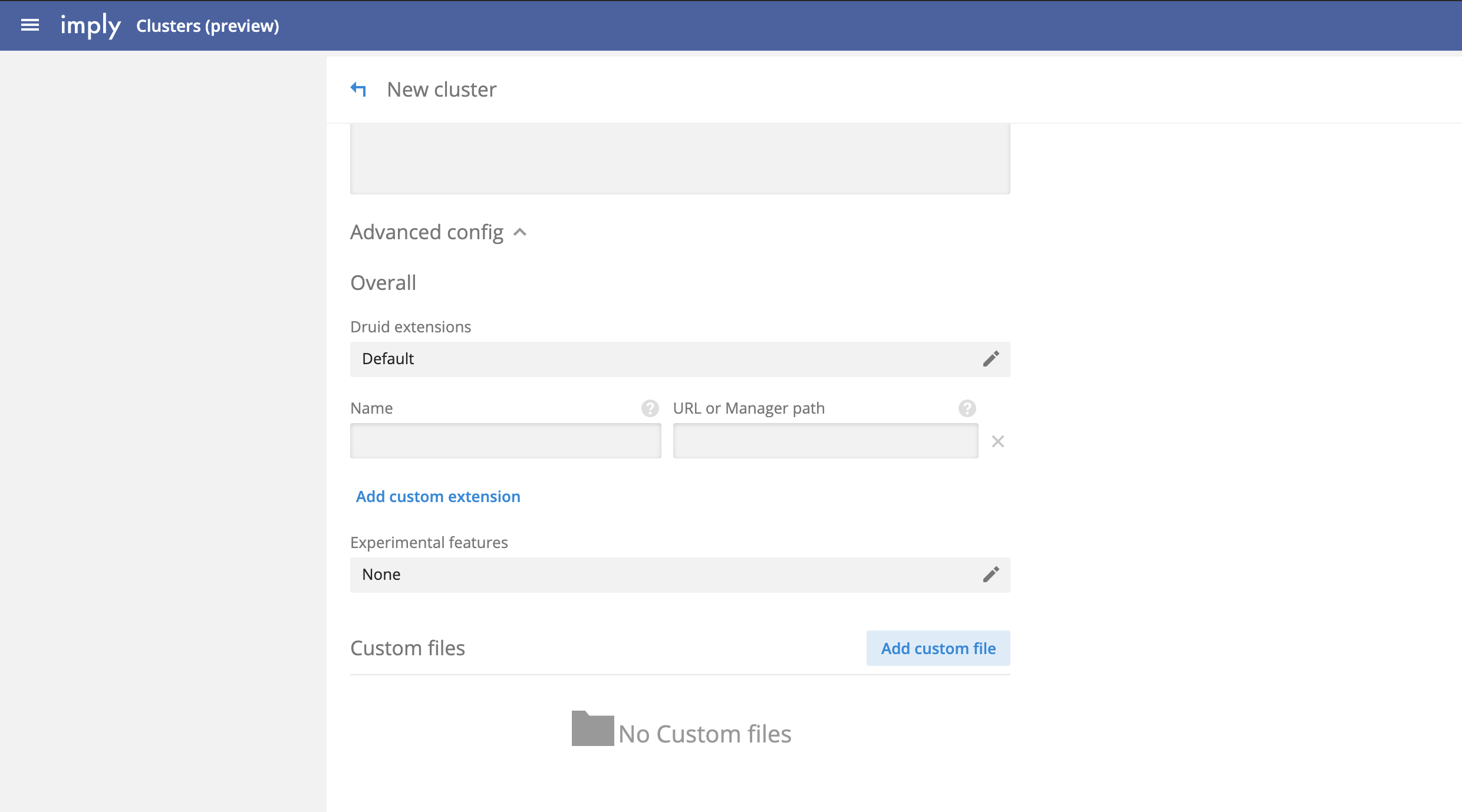 To load additional extensions, you need to make the custom extension file available to the Manager from a filesystem location or by URL. See the Kubernetes file loading instructions.

This section applies if the Imply Manager is not available to you.

You can load bundled extensions by adding their names to your common.runtime.properties druid.extensions.loadList property. For example, to load the postgresql-metadata-storage and druid-hdfs-storage extensions, use the configuration:

You can also install community and third-party extensions not already bundled with the Imply distribution. To do this, first download the extension and then install it into your dist/druid/extensions/ directory. You can download extensions from their distributors directly, or if they are available from Maven, the included pull-deps tool can download them for you. To use pull-deps specify the full Maven coordinate of the extension in the form groupId:artifactId:version.

If you are installing a Druid community-contributed extension, use a coordinate like org.apache.extensions.contrib:druid-orc-extensions:{{druidVersion}}. The version you provide should match the community Druid version that your Imply distribution is based on. For example, to install druid-orc-extension, run:

Imply does not provide support for community extensions.

Core extensions are maintained by Druid committers. Some are in experimental status and some are fully production-tested Druid components.

The imply-utility-belt extension included with the Imply distribution of Apache Druid is intended for Imply internal use only.