The following release notes provide information on features, improvements, and bug fixes up to Imply STS release 2021.09. Read these release notes carefully before upgrading to 2021.09.

Before your upgrade to 2021.09, read the Upgrade and downgrade notes.

If you are upgrading by more than one version, read the intermediate release notes too.

With Imply Cloud, the Imply team manages your clusters in AWS, while you control the infrastructure and own the data. With self-hosted Imply, you can run Imply on *NIX systems in your own environment or cloud provider.

The current version of Imply bundles version 2021.09.0-iap of the Imply distribution of Druid. Before your upgrade to 2021.09, read the Upgrade and downgrade notes.

Asynchronous query downloads (async downloads) lets you run longer-executing queries and retrieve the results. It solves problems caused when timeouts cause interruptions in the connection between query clients and the Druid cluster. The user experience with async download APIs is similar to using the synchronous APIs except that it requires three API calls instead of one. See Async SQL downloads.

You can use the HTTP DELETE method to cancel a SQL query on either the Router or the Broker. When you cancel a query, Druid handles the cancellation in a best-effort manner. It marks the query canceled immediately and aborts the query execution as soon as possible. However, your query may run for a short time after your cancellation request. See HTTP DELETE.

You can now configure autoscaling for the number of ingestion tasks used for the Kinesis indexing service based upon lag time metrics. See Task Autoscaler Properties.

The Lookup UI in the Web Console includes several changes to make it more user friendly: 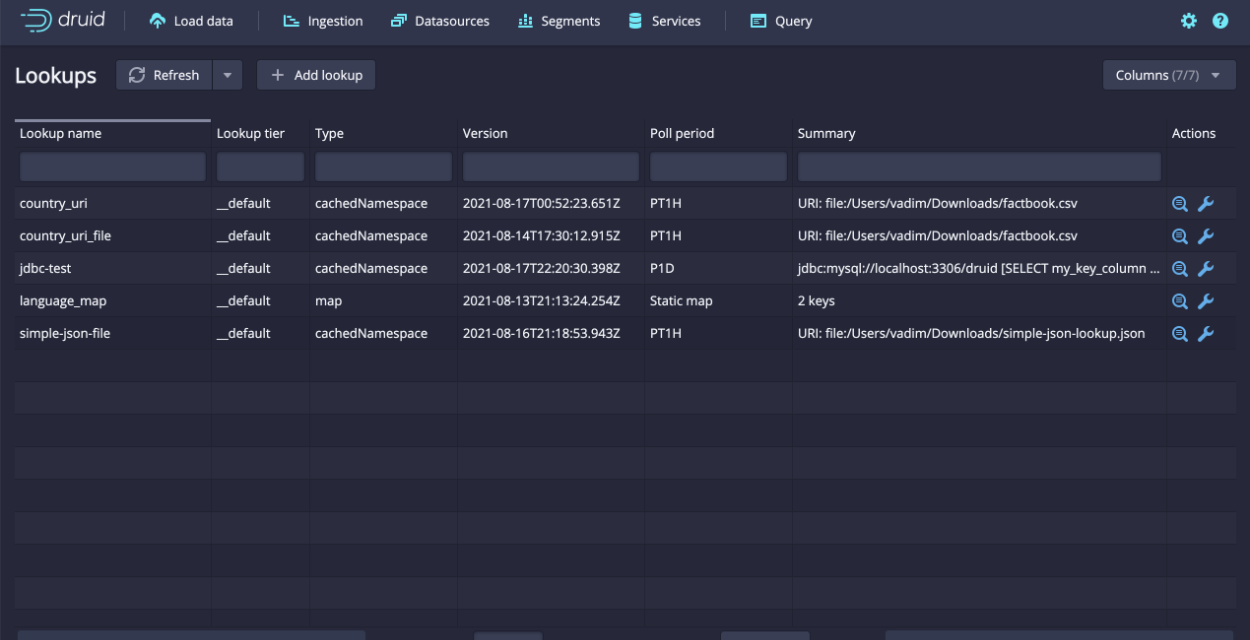 When setting up an alert, you can specify how often the alert criteria are evaluated as well as the time frame of the data evaluated. The menus for configuring these setting now include options for Week and Month, which supplement the existing options for a day, 4 hours, an hour, and a minute.

Currently, if you download data as a CSV or XLS file from the data cube view, the first row in the result set shows the total/overall value. Report attachments, however, do not include this value. You can now configure report attachments to include the total/overall values as a delivery option. This option is available if you have enabled attachments for the report with format CSV, TSV, or XLS (not JSON). See Scheduled reports for details.

Pivot SQL is now a beta feature, which means that it should be suitable for production after testing in a staging environment and in closely-monitored scenarios. It was previously an alpha feature. For more information, see the Pivot SQL documentation.

The us-east-2 region has been added to Imply Cloud AWS region support.

Imply Cloud now uses Amazon EBS gp3 for root and attached volumes. Previously, only gp2 was supported. Note that the root volume is where the OS, system, and Imply processes are written and executed; this does not affect segment cache storage, which uses NVMe for most instance types.

The change to gp3 takes affect as follows:

The current version of Imply bundles version 2021.08.0-iap of the Imply distribution of Druid. Before your upgrade to 2021.09, read the Upgrade and downgrade notes.

This release introduces the STRING_AGG string aggregator function. STRING_AGG is similar to the ARRAY_AGG function, except it returns a string instead of an array and it ignores null values. For example:

You can use a dynamic config provider for the Confluent Schema Registry. See the following:

Batch ingestion for out of order data

This release improves upon robustness for handling out of order data in batch ingestion.

You can now configure client authentication from Imply to the metadata store from the Imply Manager console. For details, see Enabling TLS connectivity.

The current version of Imply bundles version 2021.07.0-iap of the Imply distribution of Druid. Before you upgrade production systems to 2021.07.0-iap, read the Upgrade and downgrade notes.

You can now specify particular dimensions, measures, visualizations, and filters as the default view when users open a data cube. In other words, you can alter how the data cube looks in any way that you like, and then save this altered version as the default view.

The current version of Imply bundles version 2021.06.0-iap of the Imply distribution of Druid. Before you upgrade production systems to 2021.06.0-iap, read the Upgrade and downgrade notes.

The agent for Imply Private for Linux now supports per-machine Druid environment variables through the /etc/opt/imply/agent.conf file. Among other abilities, this feature allows you to set the Druid host to a specific IP or hostname if the target machine has more than one network interface.

You can configure automated cleanup to remove records from the metadata store after you delete delete some entities from Apache Druid:

This feature helps maintain performance when you have a high datasource churn rate, meaning you frequently create and delete many short-lived datasources or other related entities. You can limit the length of time to retain unused metadata records to prevent your metadata store from filling up. See Automated cleanup for metadata records.

The Expression aggregator is a native Druid aggregator function that lets you use Druid native expressions to perform fold or reduce operations on any number of input columns. This adds significant flexibility to develop functionality unavailable with the default native Druid aggregation functions. It is the underlying technology for aggregate functions such as ARRAY_AGG.

If the user navigates away from a running query in a data cube or dashboard, Pivot now cancels the queries and saves server processing time. This also reduces query load by stopping a running query when the user has modified the data cube by, for example, changing the filter or the shown dimensions.

For deployments based on Enhanced Imply Private on Google Kubernetes Engine, the number of supported managed nodes has been increased to 1,000 nodes across all clusters for a given Imply Manager instance (assuming default CIDR settings of GKE).

This change requires a network configuration change that requires a hard update. This means Imply deployments will not be accessible for about 30 minutes during the upgrade. Please plan your upgrade during downtime of your infrastructure or have a planned maintenance outage.

Previously, due to the default address reservation configuration and subtracting IPs required for system use, the maximum amount of nodes that could be started by the Imply Manager across all managed clusters was 61.

The reservation has been changed to limit the capacity to 8 pods per node, and 16 pods per node on system nodes. As a result, support for managed node has been increased to around 1000 nodes across all clusters within the Manager, given the default CIDR settings.

ZooKeeper per cluster for Enhanced Imply Private on GKE

The Cloud SQL instance used as the metadata store for Enhanced Imply Private on Google Kubernetes Engine supports autoscaling. This feature was previously undocumented. The documentation has been enhanced to describe this behavior.

You can use the SQL Views feature of Imply Druid to limit user access to rows or columns within a datasource. The Imply View Manager lets you define views that expose a subset of data for access to a type of user. You can assign permissions for specific views to user roles to enable or disable user access. See the following:

Pivot 2.0 is a new visualization engine that simplifies and accelerates building visualizations from data that you query. Pivot 2.0 aims to be highly configurable and highly scalable. For more information, see Pivot 2.0.

The machine types available for Enhanced Imply Private on GKE (beta) have been extended to include the following:

Enabling GKE Ingress now provides for public access, that is access to Imply endpoints from outside the GKE network. The public endpoints are shown in the API tab of the Imply Manager for the cluster.

You can now configure Druid to apply additional restrictions on the allowed protocols for URIs with HTTP and HDFS ingestion sources. This feature allows cluster operators more control over how users can load data into the cluster. The two new settings are druid.ingestion.hdfs.allowedProtocols and druid.ingestion.http.allowedProtocols, and default to ["hdfs"] and ["http", "https"] respectively. If ingestion tasks are using other protocols than these defaults, configure this setting to include them when upgrading to prevent tasks from failing. See Druid upgrade notes for more information.

A new configuration property, druid.sql.avatica.minRowsPerFrame, a counterpart to druid.sql.avatica.maxRowsPerFrame, gives cluster operators more control over the size of result ‘fetch’ size. This indirectly reduces the overall number of fetch requests required and can improve JDBC performance with large result sets because they can require many thousands of separate fetches to transfer. See SQL in the configuration reference.

Beta. This feature improves Druid support of Apache Kafka + Apache Avro + Confluent Schema Registry with updated library dependencies, providing support for authorization headers and Schema Registry client configuration. This release also introduces experimental support for Kafka + Protobuf + Schema Registry. Both Avro and Protobuf Schema Registry support is limited to the older "parser" based ingestion specifications instead of the "input format" which has replaced it. See the documentation for Protobuf.

Before you upgrade or downgrade, review the following items to avoid potential version-related issues.

The configuration parameter druid.indexer.task.batchProcessingMode replaces batchMemoryMappedIndex, which is now deprecated.

If you were using batchMemoryMappedIndex=true to work around or troubleshoot the memory improvements for batch ingestion in versions 2021.05, 2021.06, 2021.07, or 2021.08, you can set druid.indexer.task.batchProcessingMode=OPEN_SEGMENTS on the Middle Manager to retain the same behavior.

Review the documentation for batchProcessingMode in the Configuration reference to choose the best option for batch ingestion in your environment.

IE 11 not supported for Druid Console

Internet Explorer 11 is no longer supported for access to the Druid Console. Supported browsers include the most recent versions of Chrome, Firefox, Firefox ESR, Edge (Chromium version), Opera, and Safari.

Take the following measures to avoid downtime when downgrading:

All new clusters created after updating to 2021.05 use one ZooKeeper per cluster automatically. For existing clusters, you can determine ZooKeeper utilization by its ZooKeeper hosts path under the advanced settings in the Imply Manager. It will most likely be imply-default-zookeeper:2181 but may be imply-<install-name>-zookeeper:2181 if a secondary cluster was created via the installer.

After updating the path, click Apply. This will result in brief down time for the cluster.

Because of the enhanced security of this release around HTTP and HDFS input sources, if you use an HDFS input source for anything other than HDFS, for example WebHDFS, or an HTTP input source for anything other than HTTP or HTTPS, the task will fail upon upgrade. Either update your ingestion spec to conform or update the value for the corresponding configuration property: druid.ingestion.hdfs.allowedProtocols or druid.ingestion.http.allowedProtocols.