After you have ingested data into Imply, you can query the data using Druid SQL.

The Quickstart takes you through the steps to get started with Imply, add sample data, and run a simple query against it. This tutorial builds upon the quickstart introduction by showing you how to build more complex queries in the Druid console and run them in Pivot.

Before starting, make sure you have access to a running Imply instance with data loaded. This tutorial uses the Wikipedia data set introduced in the Quickstart.

Query SQL from the Druid console

The Druid console serves as the data management interface for an Imply cluster. It's where you can load and manage data. While its primary purpose is data management, it also gives data administrators an interface for building data queries, as you'll explore in the following steps.

You'll build the query in two steps, starting simple and then extending the query.

To build a simple query in Druid console, follow these steps:

The console limits the results to about a hundred by default because of the Smart query limit feature. This limit helps you avoid inadvertently overwhelming the system by preventing queries from returning an excessive amounts of data.

That's it! you've built a simple query using some of the query builder features built into the Druid Console. The following sections provide a few more example queries you can try. Also, see Other ways to invoke SQL queries to learn how to run Druid SQL from the command line or over HTTP.

Other ways to run SQL queries

The following sections describe a few other ways you can run queries with Imply.

Any query you build in the Druid Console can be run in Pivot as well. The SQL page lets you build and run Druid SQL queries against data sources: 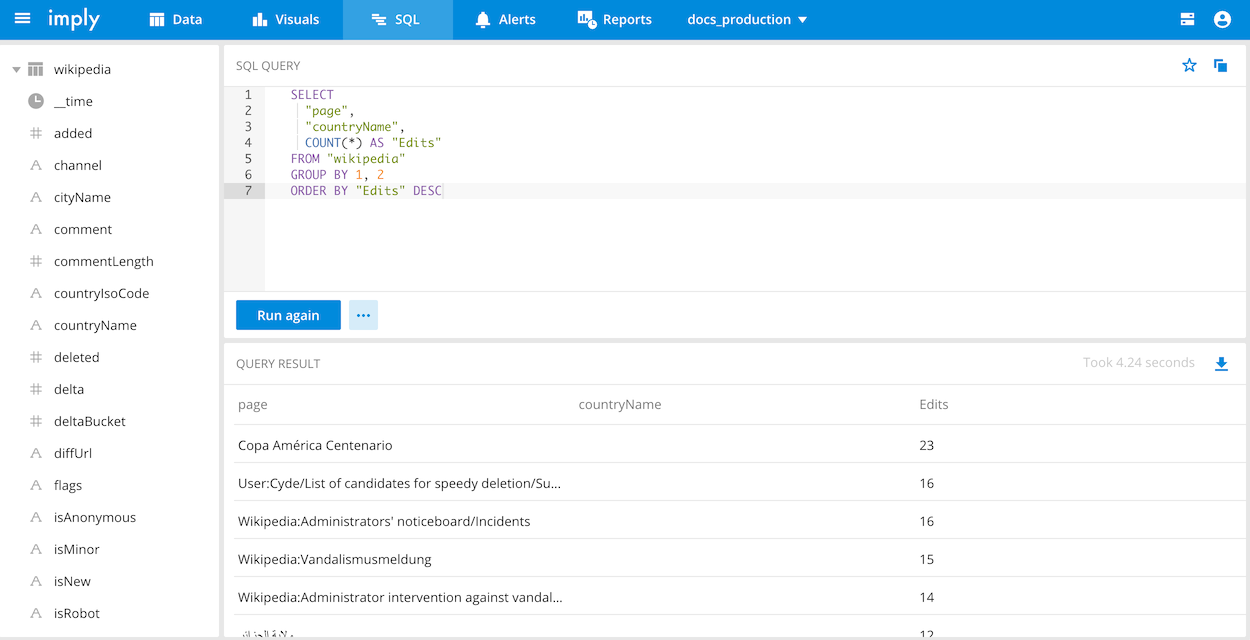 From there, you can download results and check query execution time, and save a named query (as shown above), making it available to other Pivot users.

You can also submit queries directly to the Druid Broker over HTTP.

Given a file quickstart/tutorial/wikipedia-top-pages-sql.json with the query above, run the query as follows:

← Connect to KinesisAbout the Druid documentation →